Can You Get Great Cocktails in Cambodia?

Spending an evening sitting in an easy chair, on the roof terrace of Le Moon, sipping cocktails and looking out over the Royal Palace isn’t everyone’s idea of work but Giffard’s Arthur Piffoux and barmen extraordinaire Timothy Jason (TJ), manned up and got on with it.  The boys were on a whirlwind tour of this fabulous country hosting cocktail masterclasses, mixing it with bartenders and exploring some of the most best cocktail bars in the country.

The first stop was Siem Reap, in northeastern Cambodia and home to the Ecole  D’ Hotellerie Et De Tourisme Paul Dubrule where the best of French and Cambodian hospitality converge. It was here that Les Celliers d’Asie Siem Reap invited Arthur and TJ to hold their first masterclass of the tour and some 30 barmen and women took advantage of the opportunity to learn more about the differences between cremes, premium liqueurs and liqueurs and how using fresh, natural ingredients comes through the liqueur and adds true flavour to the finished cocktail. 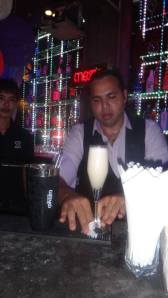 After the masterclass it was a short walk across the road to the Mezze Bar and its stylish lounge.  Decked in reds and purples the Mezze is a fusion of Lebanese and Asian culture.  The bong on every table and the fantastic Lebanese delis and shawarma are only half the story.  You should leave a little room for the Asian specialties and let’s not forget those marvellous cocktails.  The signature cocktails are inspired by Cambodian flavours and in true Asian style they incorporate fresh, local ingredients to produce some unique effects on the palette.

It was a good night so the next morning was a quiet one as the boys made their way back to Phnom Penh, arriving in time for lunch and two more masterclasses.  Arthur headed to Les Celliers d’Asie’s office for a training session, while TJ made straight for Le Moon, to meet with local bartenders prior to the evening’s main event.

By 5:00pm TJ and Arthur were reunited and running the second masterclass of the day at the Nova Club. Favoured by the hip and the chic of Phnom Penh, the Nova Club is high energy and so is its signature cocktail, the Super Nova.  The club opened in 2012 boasting a 12 metre bar, over 50 cocktails on the menu and host of Internationally renowned DJs.  Nova is partying at its glamorous best.

Moving straight from Nova’s buzzing environment Arthur and Tim found themselves at Le Moon Terrace for a consumer cocktail event and tasting session for the city’s elite.  Le Moon is, without doubt, one of the most beautiful spots in Phnom Penh.  The rooftop terrace bar sits on top of the Amanjaya Pancam Hotel and provides spectacular views over the Royal Palace, the Tonle Sap river and the bustling city below. The chairs are large, the service excellent and the sense of space intoxicating.  Some say the best views are at sunset, others at sunrise, for in-between there is a cocktail list of world famous classics that are made to a world class standard. Why not give the Dragon Fly a try?

The next day brought another masterclass and another change of pace.  Over 40 top bartenders converged on Le Cabaret.  It is easy to forget how much the influence the French have had on Cambodia’s culture but Le Cabaret brings it flooding back.  This stylish jazz bar would not be out of place in 1920’s Paris and yet it remains just as true to its Asian heritage. 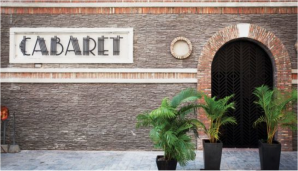 Le Cabaret offers some of the best tapas in Phnom Penh, with the bar and courtyard forming two casual dining areas.  Both are good, there is a really great feel to the bar area while the patio is a simply gorgeous setting and at the heart of everything.  There is live music three or four times a week with listings on the bar’s Facebook page.

Pour the Giffard Passion Fruit, Midori and Vodka into a mixing glass and shake.  Double strain into a chilled martini glass and pour in the wine.  Add a slice of orange peel and finish by layering.