Mum said, if you’re going to spend most of your life in a bar, you may as well get paid for your time 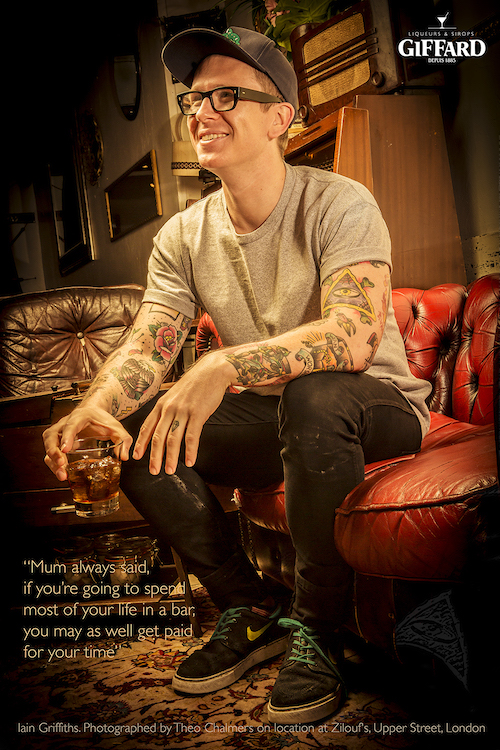 Born into a family line of bartenders, Iain Griffiths learned his trade in Brisbane, improved it in Melbourne, polished it in Sydney and brought it to perfection in London via a stint in Edinburgh. Why trek half way around the world? “Following a girl of course”, came his immediate reply.

Taking up the trade was a natural step. “Mum always said, if you’re going to spend most of your life in a bar, you may as well get paid for your time”, and did so knowing his Grandfather had been a publican for 3 decades with even his Father turning his hand a pint-pouring for a time when young.

“That still doesn’t mean they were too thrilled when it became my sole focus, though they definitely preferred it to the tattoo’s.” One stroke of genius to try and endear them to the idea was to start off with both family motto’s down either ribcage. From there and with rapid succession the rest has followed or due to follow, with the whole body planned out and mostly sticking to his preferred style of bold outline and few strong and clearly visible colours.

“London suits me. I love the energy and the vibe here. Endless opportunities”. Iain is now mixing it up with My Lyan, the company that owns the White Lyan and Dandelyan in London, as well as Henry at the Hudson in NYC. His cocktail of the moment? “The Banana Daiquiri” he says without hesitation.

Giffard is a family owned liqueurs and syrups company based in Angers, Val de Loire, France. Our founder, Emile Giffard, was a dispensing pharmacist who combined his professional skills with Gallic gourmet curiosity and in 1885 invented a pure, clear and refined white mint liqueur called Menthe Pastille. Four generations later, Giffard remains committed to quality, natural produce in all our liqueurs and syrups because we believe that flavour is always the best ingredient. Please drink responsibly.
View all posts by Giffard Liqueurs & Syrups →
This entry was posted in The Spirit of Art and tagged Cocktail, Cocktail Bars, Giffard, Iain Griffiths, London, Spirit of Art, Zilouf's. Bookmark the permalink.